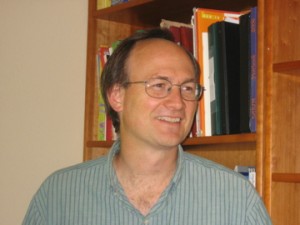 Applications involving particulate suspensions are ubiquitous, and include substances such as cement, solder paste for making circuit boards, printing ink, many foods, and precursors to ceramic and composite materials.  Our work in suspension mechanics falls mainly into two categories.  First, we are developing new theoretical descriptions of the deformation and flow of concentrated suspensions of particles in Newtonian suspending fluids.  Our their consists of frame-invariant equations that describe 1) the evolution of the suspension structure over time, and 2) the effect of structural changes on the stress (or resistance to deformation) in the two-phase fluid.  Second, we are studying how particle interactions in complex liquids, such as polymer solutions and melts, differ from comparable interactions in simpler, Newtonian fluids.  For example, we have identified a structural instability in the structure of suspensions sedimenting through viscoelastic polymer solutions, and developed a linear stability analysis that yields a criterion for when that instability should appear.  We have also used particle imaging velocimetry (PIV) to measure velocity fields in the vicinity of small numbers of particles sedimenting in viscoelastic fluids, and compared the results with analytic and numerical predictions.

Polymeric hydrogels are commonly used in applications such as bioseparations in the biochemical industry, and controlled release devices in the pharmaceutical industry.  We are doing experiments in which we measure rates of diffusion of globular, nanometer-scale proteins and micelles in crosslinked hydrogels that have pore sizes with comparable dimensions.  We are also measuring rates of diffusion of hydrophobic solutes, such as pentanol or octanol, in the presence of micellar aggregates, to study multicomponent effects.  We perform our experiments by using holographic interferometry, in which interference fringes are formed from a gel at some point in time and a holographic image of the same gel taken at an earlier time.  Diffusion in the interim results in changes in the concentration (and hence refractive index) profile, giving rise to the light and dark fringes that are analyzed to obtain the diffusion coefficient.  These measured coefficients are compared with theories that we have developed, based in part on the principles of low-Reynolds-number hydrodynamics and irreversible thermodynamics.

Fluid flow in the xylem of living plants

Although chemical engineers are better known for their work on a different type of plant, living ones offer a fascinating and relatively unexplored set of new challenges.  The network of conduits known as the xylem is responsible for carrying water from the roots to the leaves, and we are working with our colleagues in the department of Viticulture and Enology to develop a better understanding of how these networks function.  In particular, because the water in the xylem is in tension, it is susceptible to the formation of bubbles that impede its function.  In addition, the xylem structure plays a role in the spread of parasitic organisms through plants that is not yet understood.  In addressing these issues, we are using high resolution computed tomography (HRCT) to image xylem networks in grapevines, and modeling the flow by using the principles of low-Reynolds-number hydrodynamics.