Chalcogenide glasses are an important class of materials that are sulfides, selenides or tellurides (S, Se, Te), mainly of Ge, As, P and Si with minor concentrations of elements such as Ga, Sb, In and La.  Because of their infrared transparency which can be altered on exposure to band gap optical light, chalcogenide glasses find application in passive and active optical devices and in non-linear optical components.

We use state-of-the-art spectroscopic (nuclear magnetic resonance, vibrational and x-ray absorption spectroscopy) and diffraction (neutron and high-energy x-ray) techniques in combination with reverse monte carlo simulation to study the structure and relaxational dynamics of chalcogenide glasses and liquids in order to develop comprehensive and predictive structural and dynamical models of macroscopic physical properties such as molar volume, thermal expansivity, optical absorption, viscous flow and diffusivity.

Our latest studies focus on the rheological behavior of chalcogenide and other glass-forming liquids under steady and oscillatory shear and the atomistic nature of the associated structural deformation that may facilitate viscous flow. On several ongoing investigations related to this project we actively collaborate with scientists at Corning Incorporated and National High Magnetic Field Lab.

The key objective of this project is to study quantitatively, the effects of pressure and temperature on glass/liquid structure and dynamics in order to investigate whether, similar to crystalline polymorphs, structurally and thermodynamically distinct phases of the same composition can exist also in the case of glasses or liquids.

We employ in situ studies of structural changes at high pressure involves the use of high-pressure and high-temperature diamond anvil and multi-anvil cells in conjunction with x-ray and neutron diffraction or Raman spectroscopic techniques.

For these experiments we extensively collaborate with scientists at national laboratories (Advanced Light Source at the Lawrence Berkeley Lab, Advanced Photon Source at the Argonne National Lab and Brookhaven National Lab) and at other universities and institutes in Europe (ICEHT in Greece and University of Lyon in France).

3. Potential Energy Landscape for ionic conduction in glasses and ceramics

Ionic transport plays a key role in controlling a wide range of properties and processes important for applications such as catalysis, batteries, fuel cells, environmental sensors, and resistive random-access memory devices. The complete energy landscape provided by variable short- and mid-range order in these multi-component systems determines their functionality, with both bulk and interfacial structure playing important roles in enhancing or diminishing ionic transport.

We investigate the fundamental ionic hopping dynamics in a wide range of crystalline and glassy solid electrolytes for fuel cell and battery applications using in situ high-temperature dynamical NMR spectroscopy. Our objective is to understand what controls the details of the energy landscape that in turn controls the ion dynamics over a wide range of timescales.

Polymer derived ceramics (PDCs) are a broad group of x-ray amorphous but nanoscopically heterogeneous materials obtained by careful thermal decomposition of organic polymers which provide silicon, carbon, oxygen, nitrogen, and/or boron in controlled proportions. They are lightweight, have excellent mechanical and thermal properties, and persist without crystallization or degradation to near 2000 K.

This project is a collaboration between groups in the U.S.A. and Germany with expertise in synthesis (Riedel in TU Darmstadt), structural characterization (Sen at UC Davis)  and thermochemical measurements (Navrotsky at UC Davis) to generate fundamental understanding of the structure, bonding, and stability of these materials in the SiCO, SiCN, and SiBCN systems.  The nature of the nanophase domains and their interfaces which contain multiple bond types may be the origin of such stability.  Our research group works on detailed structural characterization of these materials at various lengthscales ranging from few angstroms to a few nanometers using multinuclear NMR and small angle x-ray scattering.

Room temperature ionic liquids (RTILs) are salts that are liquid at or near room temperature. RTILs are characterized by a number of remarkable physical-chemical properties, such as negligible vapor pressure, extremely low flammability, high thermal stability and large electrochemical window. These interesting materials have recently attracted much attention because of their potential use as electrolyte in battery, as green solvent for organic syntheses and for CO2 sequestration, to name a few.  Many RTILs are also known to be good glass formers.

We use multinuclear NMR spectroscopy to study the dynamics of the constituent cations and anions in RTILs to understand the connection between ionic motion and macroscopic transport properties in relation to glass transition. 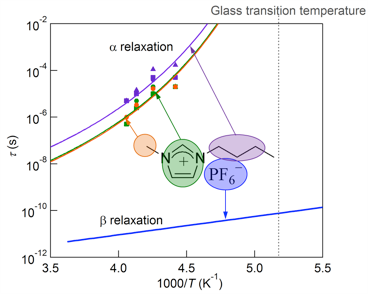