We hosted two sessions at this year’s ASME Dynamic Systems and Control Conference in Fort Lauderdale, Florida, USA with upwards of 20 experts in our small sub field. We had representation from Japan, the USA, the Netherlands, and Italy. This post details some of what went on.

We were fortunately able to get two sessions accepted to this years Dynamic Systems and Control Conference focused around the topic of single track vehicle (mostly bicycle and motorcycle) dynamics, control, and handling. Researchers from around the world participated. It was great to see many of the faces from the 2010 BMD Conference and many other new faces.

We opened up the sessions on Thursday with a special session entitled “The Future of Bicycle and Motorcycle Dynamics and Control” [original abstract, planning docs, handout]. Stephen Cain from University of Michigan chaired th first half in which five 10 minute lightning talks were given by Andrew Dressel, Ichiro Kageyama, Matteo Massaro, Dale Luke Peterson, and myself. They touched on robotic vehicles, full scale simulators, novel tire models, tire data collection, and tied these into the future directions of the research field.

Following the talks, Stephen and I facilitated a group discussion to develop a road map to future research directives. We started by having everyone in the room (some ~20 people) give their name and, in their opinion, the most critical/important topic(s) that need discussion. These were the identified needs:

After we heard from everyone we chose three topics to spend more time on: tires, the human, and community. We only talked five minutes about each due to my mistake of thinking we had to end at 11am instead of 11:30 (I apologize), but nevertheless we were able to get the conversation started on these topics. These were the notes:

These topics started conversation among the participants which continued throughout the conference. In the afternoon, Mont and I chaired the invited session on single track vehicle dynamics which included six 20 minute talks with questions and answers [proposal 1, proposal 2]. We had talks from Adrian Cooke (University of Twente), Stephen Cain (University of Michigan), Arend Schwab (Technical University of Delft), Matteo Massaro (University of Padova), Shintaroh Murakami (Keio University), and Jigang Yi (Rutgers University). The topics ranges from stability during braking and learning to ride to neuromuscular dynamics and controller identification. We had over 30 attendees during the session and some excellent talks. Matteo’s talk was also selected as a semi-plenary talk where he was able elaborate to a larger audience later in the afternoon. Most of the relevant papers have been added to the Mendeley group.

We all complained about the lack of food at the conference (even for $500 fee), so we spent most of our social time together as a small group at various restaurants. My favorite part was floating in the Atlantic in the early hours of the morning chatting about research and such. Fort Lauderdale as otherwise a rich man’s land with tons of cars and strip malls. Many of us rented bicycles and braved the roads and giant cars to get around, with one amazing late night ride through the rain. The conference organized the Jungle Queen boat (hideous) to take us around Thursday night and see the giant mansions in the “Venice of Florida”. There were of course not enough plates and each person was only allowed to get one drink (even if you were willing to pay for it!). Nonetheless the bicycle/motorcycle conversations continued and plans started hatching for making a more formal organization. Shigeuro Fuji from Yamaha spoke on Friday (he was supposed to be in our session!) about measuring low speed weave oscillations in motorcycles and we all started packing up to head back to our respective homes. Stephen and Matteo went to the keys for the weekend and Arend made a trip to Miami before he went back home.

We worked hard one night on names for an organization. Some of the ideas are:

and not so good names:

These were more or less some start of the vocabulary we need to standardize to. We’d all had a few drinks after figuring this stuff out.

Andrew proposed some basic functions for the group which seemed like a pretty good set of goals:

And lastly a couple of fun things. This one presentation had the sexiest nude 3D model I’ve ever seen in an engineering conference NSFW!! 🙂 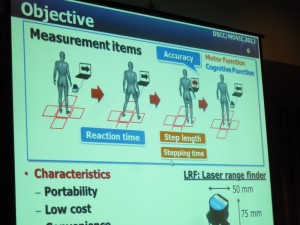 And I thought it was really amusing that the MathWorks booth was totally focused on Arduino. The reps talked so much about Arduino, you’d hardly know it was MathWorks. But when I asked one of the reps how they are contributing back to the Arduino community, he got defensive and said MathLab will NEVER be open source!! I don’t think he understood my question. MathWorks is benefiting from Ardunio’s success, as many others are, but most beneficiary’s contribute back to Arduino (I hope) with code, support, funding, etc. MathWorks is sending zero of anything back upstream. Too bad. They’ll soon learn that they will have to embrace open source to keep up with the Jones’s.

All-in-all the conference was a success and I had a great time hanging with the few folks around the world that get stoked on our small but rad research topic. Hopefully we will all meet up again next fall for BMD 2013.