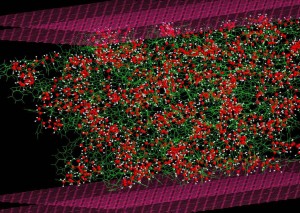 Polymer brushes are formed when flexible macromolecules are attached to a substrate and the density of the anchor-points is high enough for the grafted chains to be forced to stretch away from the substrate surface. Polymer brushes are of major scientific interest since they play a key role in many important problems in polymer, bio, and surfactant surface science (such as colloid stabilization, tuning of adhesion and wetting properties to lubrication, friction, and wear). The structure of a given polymer brush is critically dependent on the absence or presence of a solvent. While in the absence of a solvent the polymer chains typically prefer to curl up at the surface, addition of a ”good” solvent can cause stretching of the chains. The physical driving force for this transition is the competition between configurational entropy and the energy gained by optimizing the polymer chain-solvent interface. The goal of this work is to investigate the structural and thermodynamic properties of polymer brushes at various grafting densities under confinement. Furthermore, the effect of a varying toluene solvent solutions are studied. We also investigate various systems of non-grafted, confined polystyrene melts as these constitute the reference to which the grafted system will be compared.