Small molecules that interact with the phospholipid bilayer are necessary for cell survival. These molecules take part in many tasks; nutrient transport, internal pH and osmotic pressure regulation, and the detection of specific signaling molecules. We are interested in investigating the interactions between the lipid bilayer and alcohols at a physiological relevant length scale. Alcohols can also serve as models for general anesthetics and are relevant for understanding how ethanol affects yeast cells during wine fermentation. This figure shows that alcohol molecules can instigate lipid flip-flop. 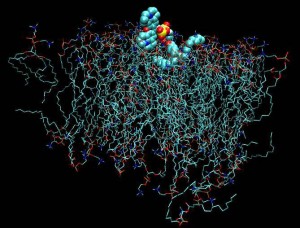