Lateral and axial load tests are often performed on pile foundations to assess their load carrying capacity on a site-specific basis. The need to construct a reaction system, usually involving additional piles, is one reason why pile load tests can be expensive. The Statnamic system for pile load testing is a relatively new method that does not require an independent reaction system. For this reason, it can be an economical alternative to conventional loading methods. The following photos are from a demonstration program at the 1997 conference of ASCE’s GeoInstitute in Logan, Utah. 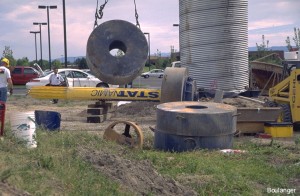 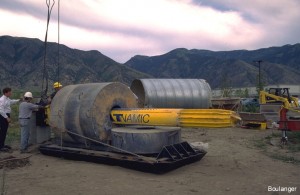 Here the Statnamic system is laid horizontally on a skid in preparation for a lateral load test of a large-diameter CIDH pile. 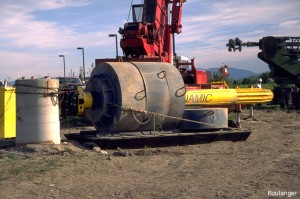 The Statnamic system is connected to the head of the CIDH pile. 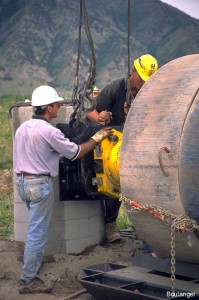 Close-up of the bearing connection being the Statnamic system and CIDH pile. 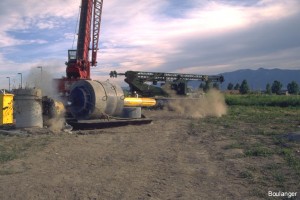 The rocket engine is fired, producing a controlled-duration loading pulse. The rocket fire causes the Statnamic system to slide away from the CIDH pile. Records of force and acceleration during the load pulse are used in analyses to back-calculate the lateral loading behavior of the CIDH pile. 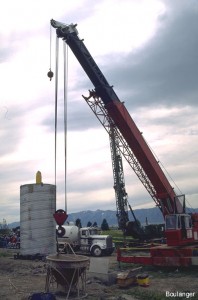 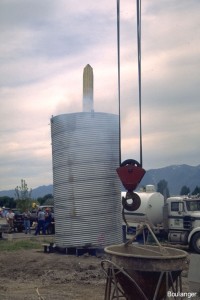 A cloud of smoke accompanies the firing of the rocket. Again, measurements of axial force and acceleration on the pile head are used in analyses to back-calculate the axial loading behavior of the pile.