Flow slides are shallow slope failures triggered by saturation of the ground and groundwater seepage. They often occur during intense rainfall when the soils at the surface of the ground become saturated by infiltration and/or by water seeping upward from more pervious soil or rock beneath. The saturated soil has little strength, and flows like a wet paste. 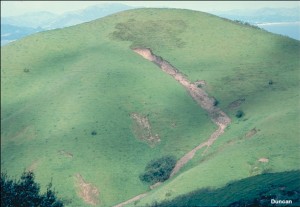 This flow slide in the hills north of Berkeley, California occurred in May 1983 during an intense rainfall. (Photo by Nick Sitar). 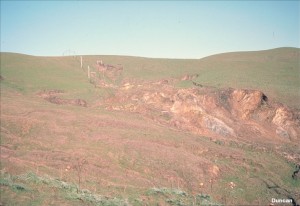 At the head of this flow slide, most of the soil overlying the rock has become saturated and flowed downhill. (Photo by Nick Sitar). 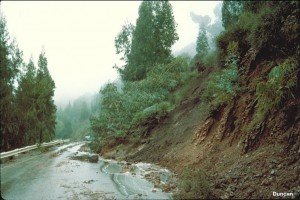 Although only the upper two or three feet of the ground is involved in a flow slide, the rapidly moving material is capable of knocking down and carrying along large trees, as in this slide along Fish Ranch Road in the hills east of Berkeley, California.