Dams constructed of soil, of rock, or of a combination of soil and rock are called embankment dams. Embankment dams are most economical where the materials at the dam site can be used to construct the embankment with little or no processing. Small embankment dams can be built of a single type of soil, which must hold back the water and provide enough strength for stability of the embankment. Large dams are usually “zoned,” with fine soils (silts or clays) at the center of the dam (the “core”) to hold back the water, and sand, gravel or rockfill in the upstream and downstream parts of the dam (the “shells”) to provide the strength needed for stability of the embankment. 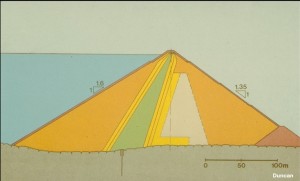 This photo shows a cross section through a zoned rockfill dam in Norway. The yellow zones downstream from the green core are the filter and the drain. The filter is graded to hold the particles within the core in place, while allowing seeping water to pass freely. The drains have high enough permeability to carry the seepage without allowing any significant pore water pressures to develop in the downstream parts of the dam. The rockfill shells are shown in orange. The gray zone between the drains and the shells is a “transition zone,” used to make economical use of as much of the soil at the site as possible. The steep slopes indicate that the rockfill of which the shells are constructed has a high angle of internal friction. 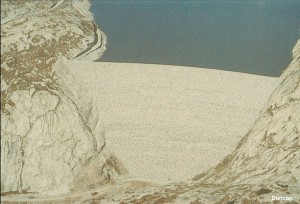 This photo shows an aerial view of a rockfill dam in Norway with the reservoir full. 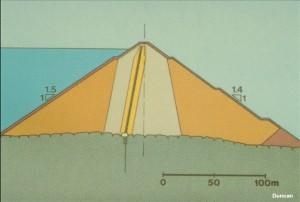 This photo shows a cross section through a rockfill dam in Norway that was constructed with an asphalt core only one meter thick. Norwegian engineers have developed this technology because at some sites in Norway there is no clay available from which to make the core. Very high quality control is necessary for such a thin core. 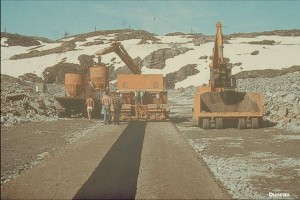 Here the asphalt core is under construction. The core and the adjacent transition zones are constructed to very exacting standards.