Our group focuses on imaging ultrafast dynamics of electronic and magnetic materials. The main focus is on understanding and manipulating the switching in magnetic materials (up to down spin domains) and phase transitions in metal-insulator materials, ferroelectric materials on femtosecond timescales and nano-meter length scales. Probing in time domain allows us to discern role played by different components (electrons, spins and lattice) in these materials following excitation by laser or electric field or current. The main characterization tools utilized in our  research group vary from in-lab capabilities such as thin film deposition, Magnetic Property Measurement System (MPMS) and Versalab for characterizing electrical and magnetic properties of materials to time resolved X-ray diffraction performed at synchrotrons and x-ray lasers housed in National User Facilities. Thin film growth is done using magnetron sputtering and thermal evaporation. Photo-lithography and ebeam lithography at CNM2 at UC Davis is utilized to fabricate nanometer scale structures.

Left to Right: Ultrafast manipulation of magnetite via optical laser, spin injection from cobalt to copper layer in a spintronic device, speckle pattern obtained from orbital ordering in magnetite.

Correlated oxides including materials showing metal-insulator transition have recently gained interest as potential candidates for novel electronics and photonics devices. Here we provide a brief glimpse of some of our recent work on accessing ultrafast timescales and ultrasmall lengthscales in correlated systems including cobaltites, nickelates and magnetite. 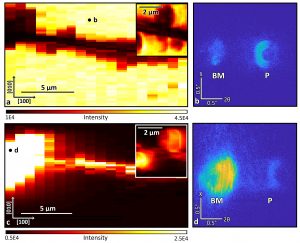 X-ray imaging of phase separation in cobaltites: Perovskite cobaltite heterostructures provide access to emergent functional and structural phases which are not present in the bulk constituent materials. However, the role played by nanoscale morphology, i.e. , phase separation, and defects in these oxide thin filmas and heterostructures remain largely unknown. In our recent study, we utilize x-ray nanodiffraction to directly image the nanoscale morphology of cobaltite thin films as they are progressively transformed from the equilibrium perovskite phase to the metastable brownmillerite (BM) phase with increasing Gd thickness. Our studies show the coexistence of perovskite and BM phases with a critical oxygen vacancy concentration threshold which leads to the formation of extended BM filaments. (I. Rippy et al PRM 3, 082001 (2019)) 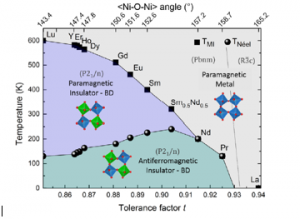 Laser-induced metal-insulator transition in nickelates: Rare earth nickelates (RNiO3) perovskite oxides display metal-insulator transition (MIT) which is accompanied by transformation from a paramagnetic (PM) state to an antiferromagnetic (AFM) state, Ni charge disproportionation, and the crystal structure change from orthorhombic to monoclinic. The MIT is closely linked to the Ni-O-Ni bond angle; therefore, the functional parameters can be modulated by a large variety of parameters such as temperature, pressure, R-size and epitaxial strain. Our group utilizes laser-induced excitaiton  to manipulate MIT in nickelates on ultrafast timescales which allows access to intriguing properties and transient states that are inaccessible in thermodynamic equilibrium. Time resolved x-ray diffraction and spectroscopy is used to identify structural, electronic and magnetic evolution following excitation to develop an understanding of the mechanism underlying the MIT.

Tuning ultrafast photoinduced strain in ferroelectric thin films: Ferroelectric materials possess a switchable electric polarization coupled to strain, and are of interest for numerous device applications including non-volatile memories, actuators and sensors. They respond to optical excitations through the interaction of photoinduced charge carriers with the spontaneous polarization. However, very little is known about the coupling of these photogenerated carriers with the structural response and the time-scales of these interactions.  Using time-resolved x-ray diffraction, our group in collaboration with Prof. Matzen has demonstrated control of ultrafast photoinduced strain through in situ tuning of the polarization state in ferroelectric-based devices. Out studies show that both the magnitude and the sign of the photoinduced strain strongly depend on the transient photoinduced change of the internal electric field in the ferroelectric layer, and can be actively engineered to achieve two distinct remanent photostrictive responses. These results provide fundamental insight into light-matter interaction in ferroelectrics and exciting new avenues for materials functionality engineering (Matzen et al. Adv. Elect. Mater. 5, 1800709 (2019)) .

Spintronics i.e spin based solid state devices, is an active field of research where spin of an electron is utilized for information processing. Our group has been working on multiple avenues to excite and control spin following electrical or laser excitation as described briefly in the following. 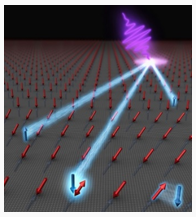 Controlling magnetic properties of Multi-principal elements alloys (MPEA): MPEA are composed of four or more principal elements and have attracted a great deal of attention due to their novel properties such as high temperature strength, exceptional ductility, high corrosion resistance, and good fracture toughness. The rationale behind having multiple principal elements is motivated by entropy stabilization, which improves the stability of disorder phases and suppresses the formation of intermetallics. While the structural and compositional aspects of MPEA have been widely explored, magnetic properties of these alloys have not been explored extensively. Our group utilizes x-ray magnetic circular dichroism to study the magnetic properties of FeCoMnCr based MPEA in bulk and thin film form. Our early results show a four orders of magnitude increase in the magnetic moment is observed for 65 nm thin film compared with the bulk sample. Evolution of magnetization as a function of temperature and applied magnetic field shows multiple magnetic transitions. A paramagnetic to spin glass transition is detected at TS ∼ 390 K for all samples. Further cooling results in a spin glass to ferromagnetic (FM) transition, and the transition temperature, is dependent on the film thickness. These results have been recently published in an invited article in Journal of Materials Research (Jangid et al. J. of Mater. Res. 35, 981 (2020))

Kukreja group has recently started working on amorphous systems including silicate and dichalcogenide glasses. Glasses in modern society are ubiquitous and are used from smart devices to aircrafts. Our group has been working on understanding dynamics in glasses using advanced x-ray characterization techniques.

Ultrafast studies of non-equilibrium dynamics in silicate glasses: Investigating dynamics of materials under extreme conditions such as high pressures and temperatures has a direct consequence on understanding and analyzing material failure mechanisms and phase transformation, which is of particular importance to space and military applications. Laser-driven dynamic compression experiments can reach pressures as high as tens of Terapascals (TPa) on a nanosecond time scale. It also offers tunability in pulse shape and pulse length allowing us to reach higher pressure at lower temperatures. Our studies focus on the time evolution of non-equilibrium dynamics in soda-lime silicate glasses subject to ultrahigh pressures. Our group combine two approaches, ultrafast laser excitation and x-ray scattering techniques, to unravel the fundamental mechanism underlying the deformation dynamics in soda-lime silicate glasses. Specifcially, by utilizing time-resolved x-ray diffraction, we can characterize structural dynamics and phase transformations, as the material is undergoing shock loading and unloading.

Coherent x-ray studies of chalcogenide glasses near the glass transition: The dynamical nature of glass transition remains one of the most intriguing scientific challenges. The rapid increase in the relaxation time of a glass-forming liquid by more than 12 orders of magnitude on cooling cannot be attributed to the relatively insignificant changes in the average structure.  This warrants a mechanistic understanding of the length and time scales of the dynamical processes at the atomic scale that are responsible for shear relaxation and glass transition. Apart from their fundamental importance, these dynamical processes associated with structural relaxation and annealing near the glass transition also control the technological utility of inorganic glasses. Our group utilizes x-ray photon correlation spectroscopy (XPCS) technique to investigate the underlying dynamical mechanism responsible for cooperative structural relaxation in inorganic glass-forming liquids across the glass transition. In our recent XPCS studies at Advanced Photon Source, we have shown x-ray beam induced structural rearrangement leading to crystallization in a supercooled glass-forming liquid of pure Se and AsSe­4 using XPCS. A heterogeneous dynamical behavior where the intensity correlation functions g2(q,t) exhibits either a compressed or a stretched exponential decay, depending on the size of the Se nano-crystallites was observed. The corresponding relaxation timescale for the AsSe4 liquid increases as the temperature is raised, which can be attributed to changes in the chemical composition of the melt at the crystal-melt interface with the growth of the Se nano-crystallites. (Li et al. Sci. Rep. 10, 5881 (2020)) 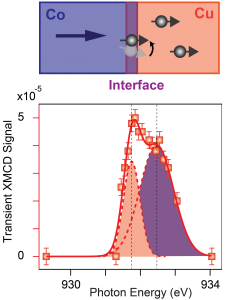 X-ray detection of spin currents: Detailed understanding of spin currents from ferromagnet to non-magnets is an important step in development of spin based devices. However, directly observing these spin currents is extremely challenging due to magnetic moment injected into non-magnet being really small, less than 1/10000 of a regular ferromagnet. We have imaged spin currents in a non-magnet Cu layer from a ferromagnet Co layer in a nanoscale device for the first time using x-ray microscopy. X-rays pulses from a synchrotron source allow us to focus on the magnetic properties of the non-magnet Cu only. We found two components to this transient magnetic moment detected in the Cu layer. The first component is the Co/Cu interface contribution, where the spin current applies a torque and aligns the interfacial spins in the direction of the current. The second component is the induced magnetic moment in the bulk Cu due to spin current. (R. Kukreja et al. PRL 115, 096601 (2015))

Ultrafast phase separation in magnetite: Magnetite (Fe3O4), is the first oxide where a relationship between electrical conductivity and fluctuating/localized charges was observed by Verwey in 1939. The Verwey transition is also accompanied by a structural change from monoclinic to cubic symmetry. Nevertheless, the exact mechanism of the metal-insulator transition has long remained inaccessible. We utilized time-resolved soft x-ray scattering to investigate the metal insulator transition (Verwey transition) in magnetite triggered by optical excitation. We measured the real time response of insulating magnetite to optical excitation and found it to be a two-step process. After an initial 300 fs destruction of individual trimeron (three Fe-site lattice distortions), phase separation into metallic and insulating regions occurs on a timescale of 1.5 picosecond. This work establishes the speed limit for switching in future oxide electronics. (S de Jong* and R. Kukreja* et al. Nature Materials 12, 882 (2013))

Above a critical fluence threshold, insulating magnetite transforms in to metallic state at timescales of 1.5 ps.