These photos illustrate levee failures due to piping and erosion in the Sacramento-San Joaquin Delta, California. 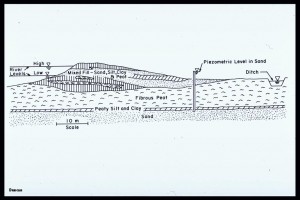 Cross-section through a levee on Jersey Island in the California Delta. The levees in the area have been built up a few inches at a time, using small equipment and available materials, without engineering input. The distribution of materials in the levees is far from optimum. As a result, erosion and piping problems are frequent, and there have been many levee failures. 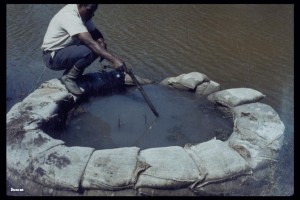 Sand boil due to seepage beneath a levee. A sand bag ring has been built around the boil to slow the outflow and rate of erosion. If the seepage and erosion can’t be controlled, the levee will be undermined by progressive erosion and piping. 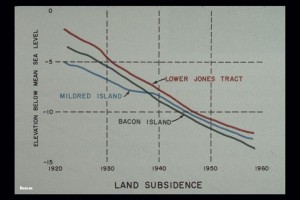 The ground surface in the islands has subsided over time as a result of oxidation of the peat soil and wind erosion. It is now constantly below the level of the water around the islands. 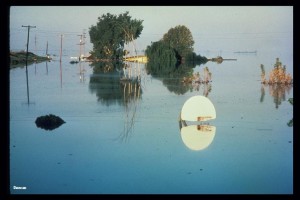 When a levee fails, the water pours through the gap in the levee and floods the island until the levee can be repaired and the water pumped out. 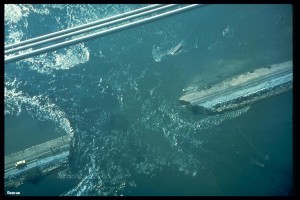 The water is flowing through a gap in the levee formed by a failure that occurred a few hours earlier. 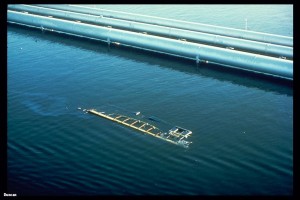 A diesel engine that was moving along the track on the top of the levee when the failure occurred lies on its side in the water. One other engine was also lost. A third engine and the freight cars remained on the track. No one was injured in the failure. 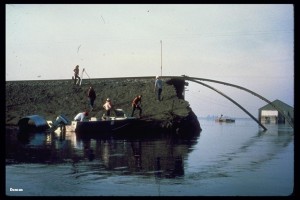 The railroad tracks hang over the edge of the gap in the levee. 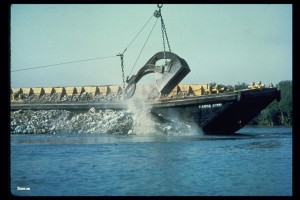 The gaps in levees are filled with large stone brought in on barges. 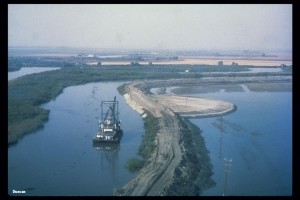 After the larger stone has filled the gap, filling continues with sand to form a complete plug and repair the levee so that the island can be pumped out.