Soils can be eroded by flowing water. Erosion can occur underground if there are cavities, cracks in rock, or other openings large enough so that soil particles can be washed into them and transported away by seeping water. Then this type of underground erosion progresses and creates an open path for flow, it is called “piping.” Preventing piping is a prime consideration in the design of safe dams. 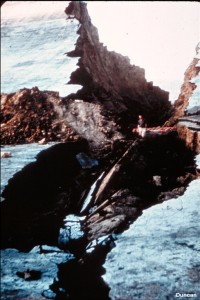 This photo shows the downstream slope of Fontenelle Dam, on the Green River in Wyoming, after a piping incident that threatened the safety of the dam in 1965. The piping was caused by water seeping through the right abutment of the dam. 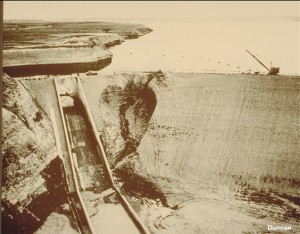 This photo shows the Baldwin Hills Dam after it failed by piping in 1963. The failure occurred when a concentrated leak developed along a crack in the embankment, eroding the embankment fill and forming this crevasse. An alarm was raised about four hours before the failure and thousands of people were evacuated from the area below the dam. The flood that resulted when the dam failed and the reservoir was released caused several millions of dollars in damage.