Hell Hole Dam was built on the Rubicon River in Placer County, California, in 1964. The dam failed during construction when the partially completed embankment was overtopped by a flood that was twice as big as the maximum flood of record. 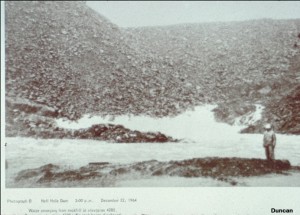 This photo shows the water emerging from the toe of the downstream rockfill shell at 3 PM on December 22, 1964. Some rock has been eroded. 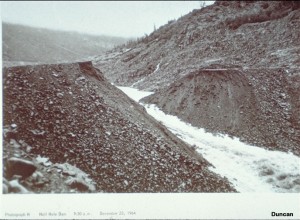 By 7 AM on December 23rd, the flow had increased as the reservoir rose behind the dam, and a considerable portion of the downstream slope had been eroded away. 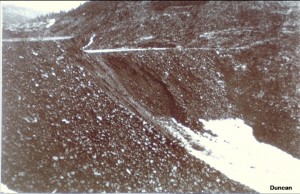 At 9:30 AM on December 23rd, a gully had been eroded across the crest of the dam, and the reservoir began to spill over the top of the fill. When this happened the velocity of flow and the rate of erosion increased rapidly, and soon a major portion of the embankment was washed away and the reservoir was emptied. 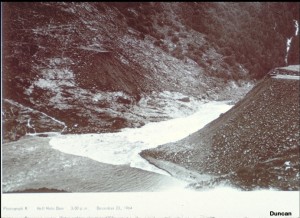 At 3:30 PM on December 23rd, there was a gaping hole in the dam, and very little water in the reservoir.