Currently, the major project being undertaken by the Atmospheric Boundary Layer Wind Tunnel (ABLWT) at UC Davis is in the investigation of the relationship between windscreen usage on a typical air-cooled condenser (ACC) using power plant and ACC performance.  ACCs are gaining popularity for use in large-scale power production as an alternative to the traditionally water-cooled condensers in an effort to reduce water consumption, as cooling for thermo-electric power plants accounts for nearly 41% of all US fresh water use.  However, it is known that adverse wind conditions, particularly conditions where wind speeds exceed 6 m/s may be detrimental to ACC performance.  When these conditions arise, a decrease in ACC efficiency, along with increased wear on several mechanical parts occurs. 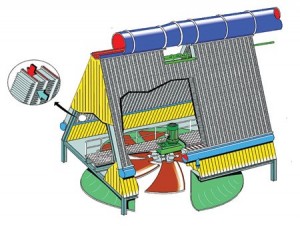 An Air-Cooled Condenser consists of a group of cells, each containing an axial flow fan that pushes air vertically, upwards and across finned-tube heat exchangers which form an A-frame structure above the fan, as depicted in the figure above. The fans are on the order of 10 meters in diameter, and the inlet to the fan is typically one and a half fan diameters or more above the ground, depending on the overall size of the ACC. It has been observed that high speed winds can have a negative impact on the thermal performance of the ACC by decreasing the total flow of air through the fans, which in turn decreases the cooling capacity.  In an attempt to reduce the negative effects associated with adverse wind conditions, some power-plants, including the one under study by the ABLWT, employ methods such as porous wind-screens that extend downward from the fan deck.  Unfortunately, the effectiveness of these mitigation methods are not fully understood.

To better understand the mechanisms behind the reduced ACC performance in adverse wind conditions, as well as the effect that windscreens have on ACC performance, the ABLWT at UC Davis uses a hot-wire anemometry system to take velocity measurements around a 1:130 scaled model of a typical ACC using power plant (see figures below).  Tests were conducted both with and without the windscreens deployed.  Velocity and turbulent intensity profiles were measured for one fan on the windward facing side of the ACC unit as well as two fans directly downwind, horizontal mass flow underneath each of these fans was determined from the mean velocity profiles.

The 1:130 scaled models shown below were placed into the ABLWT for analysis 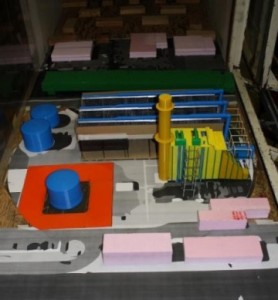 The data gathered by the wind tunnel is currently being compared with results obtained from both a field study  and a high fidelity computational fluid dynamics (CFD) model.  Test cases from the CFD and wind-tunnel study will then be compared to analogous field study conditions and measurements to show flow similarity in the models, which can then be used to investigate wind effects at conditions not available in the full-scale study.