Earthquake shaking can cause landsliding on many scales, as some of these examples show. An earthquake can cause a slope to become unstable by the inertial loading it imposes or by causing a loss of strength in the slope materials. 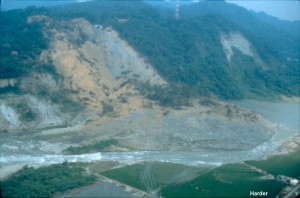 This large slide temporarily blocked a river following the 1999 Chi-Chi earthquake in Taiwan. The river eventually formed a path around the slide and began to erode the slide materials. Note that the hillside was covered with vegetation before the slide, and hence the exposed bedrock marks the boundary of this large slide. 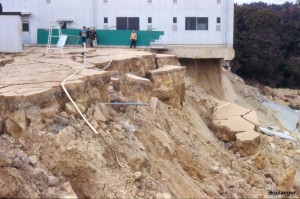 This building hangs over the head scarp of a landslide in decomposed bedrock that was triggered by the 1995 Kobe earthquake. Several homes were buried and over 30 people killed by the landslide. 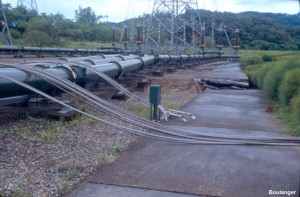 A large slide formed beneath portions of the central switching station for Taiwan during the 1999 Chi-Chi earthquake. The slide movements of about a meter caused extensive disruption to the station, resulting in extended disruption to power supplies in Taiwan. This photo shows the scarp along one side of the slide mass — notice the offset in the pavement and bends in the pipes. 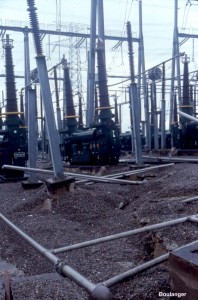 [Accompanies above slide]
The head scarp of the slide passed through a system of transformers. While the movements are not as dramatic as many other large slides, the economic consequences of this slide were tremendous because of the impact that power losses had on Taiwanese industry.