Surface rupture during the 1999 Kocaeli earthquake caused widespread damage to the civil infrastructure of Turkey. 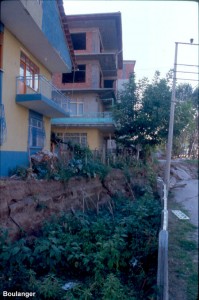 A vertical offset of about 2 m developed just in front of these buildings. The buildings appeared relatively undamaged. 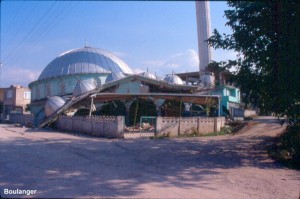 At this location, surface rupture developed on two parallel branches about 50 m apart. The one branch passed directly beneath this mosque with vertical offsets of 0.5 to 1.3 m across the site. The roadway to the right of the mosque used to be flat; The fault offset produced a step in the road that was quickly re-graded for vehicles. 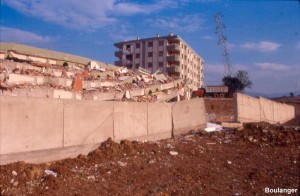 About 2 m of right-lateral slip occurred at this apartment complex in Kullar, as evidenced by the offset in the concrete wall. The rupture passed directly beneath the collapsed building. However, six other similar buildings in this complex also completely collapsed due to shaking alone. 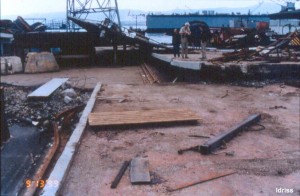 Right lateral fault movements developed in the Naval facilities, as evidenced by the offset in the concrete slabs shown here. 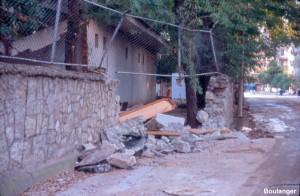 Roughly 4 m of right-lateral offset can be seen in this concrete wall. To the left of the wall, a single story building was torn apart by the movements. To the right of this location, the rupture passed through several multi-story buildings and contributed to the damage there. 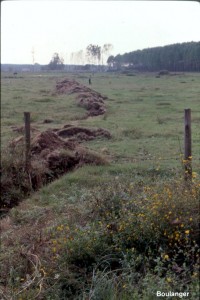 About 2 m of right-lateral offset developed across this field as evidenced by offsets in fences.