Widespread damage to buildings occurred throughout Adapazari, Turkey, during the 1999 Kocaeli earthquake. A major cause of damage was liquefaction of the recent alluvial deposits that underlaid large portions of the city. The result was excessive settlements and bearing capacity failures for countless buildings, most of which were supported on shallow foundations. 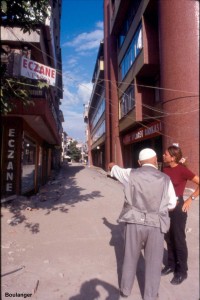 A local resident describes the damage to his neighborhood. Notice the slight tilt to most of the buildings along this narrow street, and the distortion of the roadway and sidewalks.

The mat foundation for this building was exposed when it overturned. This building has a relatively large height-to-width ratio, making it more susceptible to overturning failure. 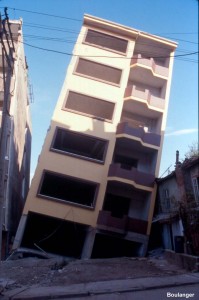 This new building was not yet occupied at the time of the earthquake. Again, the bearing failure of its mat foundation was related to its relatively large height-to-width ratio. 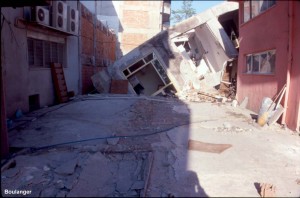 Another mat foundation failure, with the supported building collapsing onto an adjacent building. 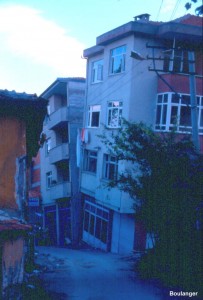 These buildings are all tilted as a result of liquefaction in the underlying alluvium. Notice that these buildings have smaller height-to-width ratios than shown in the above photos. 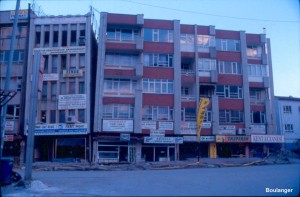 A large gap has opened up between these two buildings which have settled and rotated as a result of liquefaction. 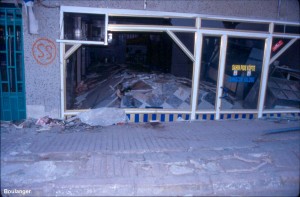 The slab-on-grade inside the ground floor has heaved and the shallow footings for this building have punched into the ground.