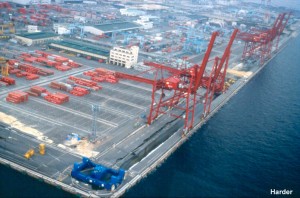 Aerial view of a corner of Rokko Island. The light-colored material on the paved surface (lower left corner) is sand that boiled to the surface as a consequence of liquefaction. The island is ringed with large gravity caisson “quay” walls, and the surrounding water is about 15 m deep. 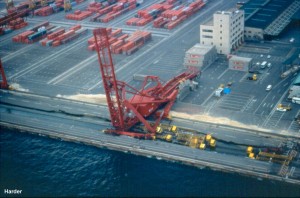 A closer view of the collapsed crane (also visible in the previous photo). The quay wall has displaced outwards and a graben (depression) has formed behind it. The cranes had their legs spread apart, causing buckling and yielding, and collapse in this case. A series of yellow trucks were caught in the graben. 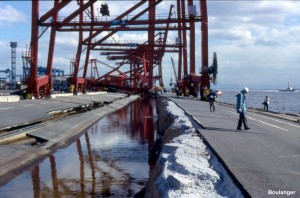 A view of the graben from the top of the quay wall. The collapsed crane is visible in the background. The rear legs of the two closest cranes are locally buckled and off their rails. 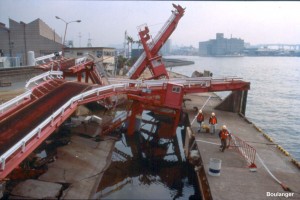 This car ramp at a ferry terminal collapsed when the fill materials liquefied and the quay wall displaced outwards. The graben behind the quay walls is filled with water. 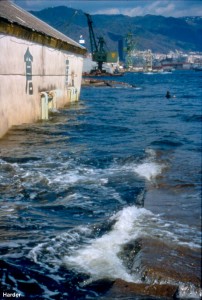 This is the end of an older pier that became submerged due to liquefaction-induced deformations. The diver in the water is inspecting the submerged quay wall. 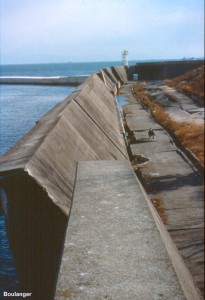 This quay wall along a water channel has deformed outwards due to liquefaction of the fill materials. 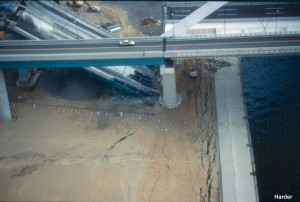 A segment of this new bridge (Nishinomiya bridge) collapsed because of foundation deformations that are attributed to the effects of liquefaction. Ground cracks behind the quay walls and parallel to the water edge are indicative of the lateral ground movements that occurred. Sand boils are visible on the ground surface.