These photos from the 1995 Kobe earthquake in Japan illustrate various effects of liquefaction on tanks and their foundations. 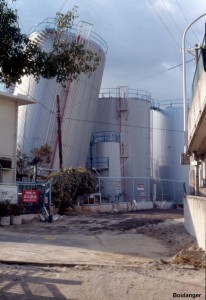 This tank farm was located on reclaimed land along the waterfront. The cohesionless fill materials liquefied during the earthquake, and many tanks experienced excessive settlements or bearing failures. 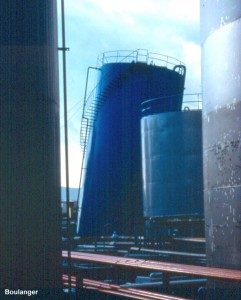 The large blue tank in the middle of the photo tilted excessively due to liquefaction of the foundation soils. 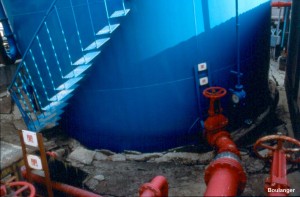 [Accompanies above slide]
The tank foundation punched into the ground on one side. Notice that the numerous pipelines connecting the tanks were heavily damaged as well. 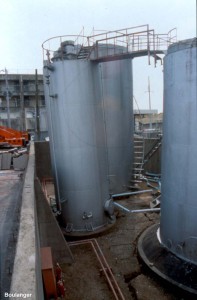 This set of tanks, also near the waterfront and on reclaimed land, experienced excessive settlements due to liquefaction. Notice that the walkway across the top of these two tanks has been torn away from the larger tank. Cracks in the ground are visible near the base of the large tank.